Every now and then I like to get a little introspective, it helps keep my head in the right place. This is one of those times. Driving back from work I got to thinking about where I am in life, spurred on a little from a conversation or two Heather and myself had over the weekend, and the talk of New Year resolutions that everyone has at this time of year. By many measures you could say I’m in a good place - I’m young, I’m healthy, I have a good family, good friends, I have a nice flat, a steady job I (mostly) enjoy, I’m not in debt (excepting that student loan), I don’t have any real dependencies. I’ve achieved things I didn’t think I would - I’ve moved country and lead a successful independent life for two and a half years now. And yet, where am I in the big picture of my life?

Well, that depends on my goals I suppose. And there’s the rub and the realisation. It’s not the first time I’ve figured it out, but it’s the first time that knowledge has gone further than intellectual understanding, and had a little gravitas put behind it: I don’t have clear goals, so I don’t do anything other than accept what happens and go with the flow.

I’ve known that for some time, but there’s a difference between knowing something, understanding it, and appreciating it. I’ve known it before, but been content to leave it at that. Today I did something new with that idea, and pictured myself in five years. It made me realise that if I carry on with the attitude I have, my life in five years time will be no different than it is now. Which is not a bad thing, but it’s a bit of a boring waste. So - I ought to do something about it. Trouble is, I’m not very goal orientated, and that’s why for the last two years my life has essentially been in the same place. What motivates me more often than not is moving away from a bad scenario, rather than moving toward a good one. So, for all the talk I make about wanting a girlfriend, of one day having kids - it doesn’t motivate me to go and get/achieve those things. I know that sounds weird, I think it likely is weird, but that’s how it goes in my noggin’. It’s not like I’ve lacked for opportunities, and it’s not as though making opportunities is really all that hard - but somehow I’ve never taken advantage of the one’s that crop up, and I’ve never created any for myself either. I have that sort of attitude with everything, I think I always have.

Well, that’s not going to get me anywhere, and before I know it I’ll be past 30 and still in the same scenario I’m in right now. A good life, but not going very far from where it already is.

So, I decided that I need to set some more definitive goals, and start getting motivated toward those goals. The question is how to do that given that my head simply doesn’t work that way normally. In the past I’ve kept a little diary where I noted down anything I did that day which was in some way new, or good. While I was doing that I felt somewhat motivated and certainly felt good about myself - but before long the practice died out and I’ve fallen into the same stale way of thinking. Easily done when you’re too busy, or too tired. The trick I need is to keep myself aware of the mental state I’m in right now, and to be aware of when I start to drift back into my complacent normality, so I can make sure I go back to motivated thinking.

It’s a two-fold problem, one is the whole ‘keeping the good habit/thinking’ going once it’s started. The other is somewhat more fundamental - finding goals that I can make motivating. I’m hoping to achieve that one in a couple of ways - the first is to figure out some things I’d like to imagine of myself in the future, and then picture myself doing/thinking those things in the here and now. In that way it might help shift them from a vague disneyfied dream unconnected with reality, into a more realistic and concrete idea of how things could be (and why they are not, and therefore how to change that). Doing that was what’s motivated me to write this post. Such an approach will hopefully allow me to see that those fuzzy dreams can be thought of as a reality, and so figure out what’s required to get there. In summary, I suppose, the idea is to make goals motivating by visualising achieving them now - so they are less of a daydream and more of a tangible idea. The second part of trying to make goals motivating is to actually set goals and track how I achieve them. To make goal setting and getting pleasurable and memorable.

So, tonight and tomorrow I’m having a think and writing down as many things I want to achieve as possible (no easy task), and tomorrow I’m also going out at dinner to buy two diaries. In one I’m going to make small goals for myself, one’s I know I can achieve. There will be a vague goal per month, for example ‘by this date you will have a good sleep routine’ (rather than my erratic and mostly un-restful practice of sleeping randomly - which is why I feel fuzzy headed even while writing this), and along the way there will be numerous smaller and more specific goals too e.g., ‘today, read chapter 1 of Mindfulness In Plain English’. In the other diary I’m going to write down ways in which I’ve succeeded in any of those goals, or other positive things I’ve done that will help me on my way to my greater goals. 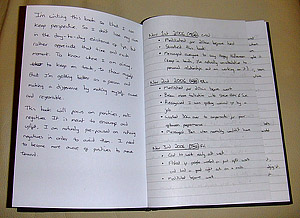 By doing these things I hope to get myself to enjoy achieving goals and thus be better motivated toward goal-making itself. Achieving the goals themselves are (at the moment) less important than simply making them and continually attempting to achieve them.

I’m almost wary of the idea, because I’ve been mentally tuned like this before - but that’d be setting myself up for expected defeat, and that’d be a self fulfilling prophecy. So here’s the first move in changing my mentality: post this and make these ideas a reality, as opposed to leaving it all thought in my head that will be allowed to fade into knowledge, rather than relevant appreciation and understanding.