I wanted to expand upon the thinking of my last post. As mentioned there, finding motivating goals to aim for has never been easy for me. Such goals never seem to materialise as concepts in my head - I am motivated away from bad things far more than I am motivated toward good things. Imagining the possible bad consequences of a choice are second nature to me, I do it all the time, but imagining the good outcomes of a choice doesn’t happen in my head unless I actively make myself do it (As an example, imagining a terrible date is far easier and far more ‘real’ for me than imagining a date going really well. In one I can feel the anxiety and discomfort as palpable things - in the other it’s just a fuzzy image with no immediacy or reality to it). Such thinking makes setting and achieving good motivational goals hard (because there’s usually no emotional attachment to perceived good scenarios). Imagining a ‘new me’ in the present works fairly well (as mentioned), but I have figured out another way of finding and setting some positive goals that are motivational, by tricking my brain.

Most people seem to look into an imaginary future and they have a solid picture of themselves as this successful person and they are motivated toward it. I find imagining my future to be rather hazy, so I flipped the concept around to play to my head’s natural (pessimistic) way of motivating my actions. Imagining myself to be an older person who was thinking back to his past, and ‘remembering’ what I did not do that I wish I had done. Basically ‘re-setting’ the present so it seemed more real, and then setting up a scenario where I wasn’t happy. A scenario I don’t like, a scenario to avoid, a scenario to move away from. That’s something I naturally find motivational, but imagining my future as unhappy is also rather depressing, so I did the same again, but imagining a different me who was happy, and was remembering all the things I did in ‘the past’ that were really good for me. That seems to do the trick. It sets up a scenario to avoid (which I find naturally motivational), and also a scenario which opens up ideas about doing things now which I can enjoy and see as steps on the way to that ‘happy me’ in the future. Oddly, the first thing I imagined happy future me doing was laughing at how I used to be so uncomfortable with social situations. It had the odd effect of making me think that awkward situations could actually be seen as enjoyable. Also, that future me I was pretending to be was in a mental position where he’d already dealt with my current foibles and was at ease with them. Which was oddly comforting, considering it’s entirely imaginary. 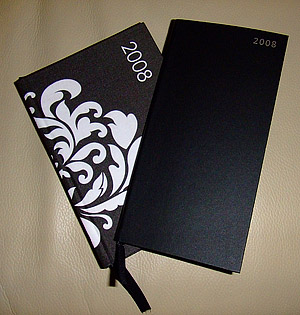 Anyway, that’s the process I’m going to try using from now on to make motivational goals.

Also, I’m happy to say, that I did in fact follow through on yesterdays post, and have bought myself two diaries to set and record the progress of my goals (both on the left, here’s the first week of planning). I’m feeling pretty positive so far. I even dealt really well with a surprise training session for a client - something that in the past would have had me nervous as anything. I breezed it, left a happy client, and it felt good too.