Why I've been quiet recently, and what I've been up to

I’ve been very quiet for the last few weeks, and I should explain why, as well as catch up on some of the things I’ve been up to. Firstly, I no longer work at Karova. I’ve enjoyed my time there immensely, just shy of three full years, and as a company and a team Karova has grown and changed a lot over that time. It has been a good ride, causing me to up-sticks and get a place of my own here in Wales, and helping me to learn a lot in all manner of ways. It was sad saying goodbye to the team (though I’ll be seeing them outside of office hours), but I am moving on to a job at View Creative, who are a slightly larger company where I’ll be working with a larger team of web and print designers. I’m looking forward to it, and anticipate learning a lot and having some fun too. I start next Monday, wish me luck! 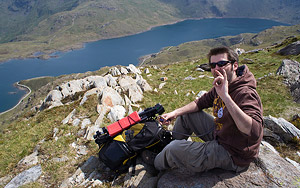 So, for the last month I’ve had a lot of time to myself and I’ve used it to get a bit of a break. It’s been nice not being on the computer every day, in fact this weekend I’ve not touched it at all. Over the last month the Victorian Extravagansa has come and gone, with Ben coming over to stay a couple of nights. We got out and about taking some shots, but sadly that weekend was pretty overcast and I didn’t get much worth putting up. I’ve also been over to Bangor a lot, hanging out with Ben and Lou, and the photography society. I’d almost forgot what socialising during the daytime was like! I’ve been back home to visit friends and family, helped dad cut my granddad’s hedges, and been to Alton Towers with Mike, Matt, and Kath. 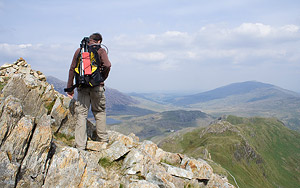 Last Wednesday Ben and I went for a walk in the Welsh mountains, intending to take some photos and get some exercise. We got to a bit where the path just ‘ended’, as it sometimes does. Normally you climb up a few rocks and find the path again. We, err, took the wrong route. And spent 20min free-climbing, had some dinner and spent 40min climbing down. We’re not climbers. We knew we were in the wrong place even before we met a group of mountaineers with safety lines and helmets descending the very bit of rock-face we had just climbed up. Why were we still climbing? Because while going up was terrifying but do-able, there was no way in hell we could climb down that route. Which left no choice but to keep going up and hope to find a safer way down. It is the most stupid situation I have gotten into, possibly ever, the drop behind us was lethal. I have said in no uncertain terms that next time we are staying on the path and, no matter how simple it looks at first, no climbing! There are a few photo’s and also a video. 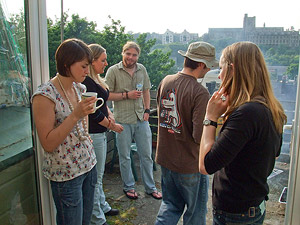 Friday was the Photo Society BBQ at Ben’s place, which was a fun and relaxing evening. The bin-bbq was pulled out of retirement once again, and the weather held too. It’s also the most relaxed I’ve felt in a long time and it was great to just randomly chat away with people. One thing that moving employer has made me realise - I’ve spent far too much time doing work related things and no where near enough socialising, so the last week or two of getting out and meeting people has been really good. I intend to keep that up. 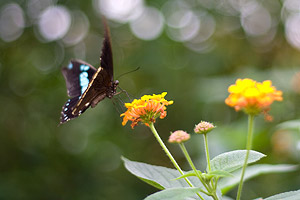 Friday also saw Matt coming over for a weekend stay, which was great. He met us at the BBQ, though the traffic was so bad he didn’t make it until about 9pm, which is a shame. We spent most of the weekend out taking photo’s as Matt is a keen photographer. We wandered around Llandudno, up the Little Orme (which I knew would be prettier and far quieter than the Great Orme on a bank holiday weekend), and took some shots of the boating club which were out as we came back. Saturday evening we went over to Bangor to chill out with Ben, where we did not a lot other than chat, watch Iron Man, and relax. On Sunday we went to the Butterfly Palace on Anglesey, which was great if a little busy for getting any great shots. We had to keep moving so we didn’t hold up other people (it’s only a small place). We did manage to spend a couple of hours in there though, and I got a reasonable few shots considering I don’t have a macro lens.

Videos from the last month

Dancing in the street

Mike Tetley (a man among men) does Salsa, and both Kath and Justine wanted a little dance right after we left the Photosoc meetup in The Harp. Here’s Mike busting some moves.

A video of Ben and myself out walking in Snowdonia. The video does a poor job of showing how steep the bits we climbed are, but check out the photo’s for a better indication.

A few snippets from the BBQ

I should point out that the reason for the ‘filming ass’ comment is because Ricky had accused me of filming Justine while she was bending over purely to catch her bending over. As you can see, that was merely the end of a longer bit of film, so while that is factually correct that I was filming her bend over, it was coincidental ass coverage rather than anything else. To illustrate the point I made the comment that I was also filming Chris bending over.