The Way of Kings: The Stormlight Archive 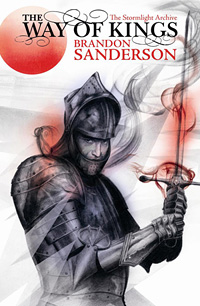 This is a tough book to review, as reading it was something of a polar experience. I finished it within a week because the thing is so hard to put down; on more than a couple of occasions I decided to call it a night only to find it was 3am, not 11pm like I’d thought. The Way of Kings is engrossing, and it is long. And yet the book was, for a considerable time, disappointing.

This is Sanderson’s first attempt at a truly large scale fantasy story (we can’t really count his continuation and completion of Robert Jordan’s “Wheel of Time” series, as the scope had already been set for him). The Stormlight Archives has been in the authors head for a decade or two, and he has now re-visited and re-written the story, which starts with this volume. Over that time it has clearly acquired a great deal of complexity and detail, which has to be dealt with. Sanderson seems to struggle with that complexity in this first part of what is set to be a many-volume set. The author has on a number of occasions commented on his writing style in earlier works, pointing to his pacing as a point of concern, and explaining that he feels it often becomes rapid and may cause his readers problems. I’ve never thought that, if anything his pacing in other books (notably the Mistborn trilogy) is the perfect balance of detail, action, and intrigue. Here, it is simply too slow. There are too many disperate parts that individually are not compelling enough. It is only much later, when the reader can start to piece things together, that the earlier parts become truly interesting. Additionally, the magic system here is not as compelling as that of his other series - perhaps because it is not explained in any real fashion, unlike his earlier books.

It was with some disappointment while turning the last page that I realised I cared about only two arcs with any passion. Kaladin’s, and Delinar’s. Not coincidentally these arcs are written in the same style and with the same skill as in his earlier (and shorter) books. Kaladin and Delinar engage as people, their stories engage, and the pacing of their parts is just right. You care, you want to know more. But, the rest of the cast I had little interest in, though a number will undoubtedly become very interesting in later volumes. The character introduced at the start, for example, is practically forgotten for the majority of the book, and when he reappears I realised that I’d not really missed him. Despite his apparent significance. For this book, not enough was invested in him, not enough was given away to make his actions intriguing. Instead, I just accepted that he had a strange rationale and stopped wondering why. He became two dimensional because the author didn’t let us see enough of his world to form a deeper relationship.

The whole book is somewhat aimless, and only seems to obtain any focus right at the end. By design, or perhaps necessity given the scale of the story he’s set to tell. Either way, this book is not like a Mistborn book - which are almost impossible to put down, where you care about each character, where each character has a clear motive, a sense of depth, and a powerful personality. Here, everything feels a bit washy and low key for too long.

There is scope here for an amazing story, and this book establishes the setting and possibilities very well. It is no doubt the start of a series I will throughly enjoy - but as an individual book, it struggles, and left me in two minds.

I think I’ll love this series. But right now, it’s not a patch on his Mistborn trilogy.